Why I Hate… Resident Evil 4 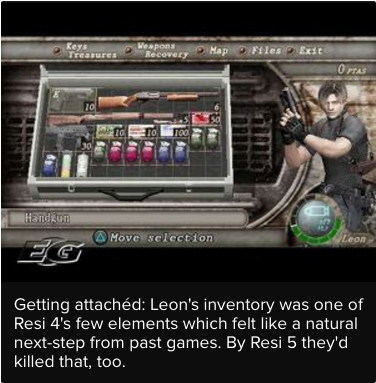 Objective
Generate interest and discussion on the Eurogamer website with a well-written, thought-provoking and reasonably controversial article.

Background
In late 2010 Eurogamer launched the Why I Love/Why I Hate series of opinion pieces where writers would take a personal and alternative look at some well-known games, and some not so well known.

The work
I pitched an article putting a negative spin on Resident Evil 4 – one of the most lauded and acclaimed titles in history; making a cogent argument that it was not the game it could or should have been.

The result
Hundreds of comments from Eurogamer readers made this one of the most talked-about articles of the month on the Eurogamer website, and the most reacted-to feature from the Why I Love/Hate series.

See for yourself
See the article on Eurogamer or browse below to read the content.

Why I Hate… Resident Evil 4

Contains scenes of violence and snore

The thing about sequels is you know what to expect. The conventions of the franchise are usually well established; they’re familiar, comforting even. They’re what gives the game its identity.

Games critics try to approach sequels with an understanding of what the franchise in question does well and where it could improve. Plus, most of all, the elements which define it as that type of game. Like any gamer, if we loved the previous instalment we really want more of the same, but better.

Then the inevitable occurs. A formula starts to feel old, so Leading Publisher X promises a dramatic reinvention for Huge IP Y with a focus on Flavour Of The Month Game Feature Z.

The end result? All too often, the core elements which should be retained and built upon are abandoned and the game becomes something else entirely. Something unfamiliar, strange and awkward, which bears only a passing resemblance to what’s gone before. Something which doesn’t quite belong.

Which brings me to Resident Evil 4.

I’m a huge fan of survival horror, but even I agree that Resi needed a kick up the arse. By the time Resident Evil Zero arrived in 2003, all that clunky wandering around creepy-but-static mansions, sipping coffee through door opening animations and battling the fixed camera had started to infect the game’s fun factor. It was time for a change.

Capcom knew this. And so the first iteration splintered off to become Devil may Cry, while another stab saw a new-look Leon S. Kennedy battling a monster with a hooked hand in a haunted house.

The iteration which made the most sense to me followed on from the excellent Code: Veronica – a fateful charge into enemy territory at Umbrella’s European HQ; answers to the questions swirling around Oswald E. Spencer; a battle against a super-powered Albert Wesker; maybe even a revelation about the mysterious shadow company he’d joined, which I’d long suspected could emerge as the series’ new Big Bad Biocorp.

Then Shinji Mikami stepped in and ruined it all with three simple words: “Umbrella was finished.”

This is one of the biggest reasons I hate Resident Evil 4. I’d spent the best part of eight years watching Umbrella get built up to the point where I was dying to take them down. That pleasure was snatched from me, suddenly and unceremoniously, in a single cut-scene.

And what were the series’ iconic zombies and devastating viruses replaced by? A mutating midget in a pirate hat. An Emperor Palpatine clone with a giant scorpion tail. An army of quasi-intelligent parasite-infected villagers who were so savage they couldn’t even use firearms… Except for the ones who could. What?

And what was Leon’s motivation for being there? To save the President’s daughter.

Resi 4’s story had squat all to do with the rest of the series up to that point. Putting aside Leon in the lead role, Ada turning up unannounced and a cameo from Wesker, the game could be part of a separate series altogether. It’s like Ubisoft deciding the Templars are a bit boring and those Assassins should battle little green men instead.

Compare Metal Gear Solid, another stalwart of late nineties, story-driven action adventure gaming. Like Resi, it was a series born of individually conceived, separately told narratives. These were interwoven to form a larger mythology.

Hideo Kojima has gone on record to say he didn’t plan it out all in advance, George Lucas-style. All the same, there was never a sense that the MGS team was making up the storyline as it went along. When Old Snake learns the true nature of MGS4’s titular Patriots, a decades-spanning story is cast in an entirely new light.

The Resident Evil team seemed to lack this ability to spin a yarn and keep the big picture in mind. And it all came to a head with the end of Umbrella.

The problem is that as long as a videogame is fun, its storyline is often thought of as something which is just a bit of a bonus. Publishers continue making the interactive equivalents of Highlander 2 and only the most hardcore seem to notice or care.

But that disappointing plot twist isn’t the number one reason I hate Resident Evil 4. It’s the gameplay. To be specific, it’s the fact I spent the 20-odd hours playing this brand new Resident Evil game wondering when I was going to get to the Resident Evil bits.

On booting up the game you discover the template has subtly shifted: it’s now an open-ended, emergent Bioshock-style shooter. All that linear action movie pacing has been taken out and there’s nary an explosive set-piece in sight.

Or how about this: imagine excitedly loading the latest Final Fantasy, only to find the expansive overworld adventuring you know and love has been replaced by endless treks round lavishly decorated, sparsely interactive linear corridors. Oh, hang on…

Resident Evil 4 is to Resident Evil what the drearily disappointing Final Fantasy XIII was to the FF series. It elevates the accessible action parts and dumbs down the bits that made you think. It’s what happens when a gamer’s series is rejigged for a mainstream audience, and it isn’t true to its roots.

At their core, the original Resident Evil games had much in common with traditional point-and-click titles. The controls were real-time rather than mouse based, but for all intents and purposes you were still visiting areas in a hub-based environment, picking up items and working out where they went in order to progress.

To get around, you’d pull up a map and carve the quickest lines between the undead horde. During your journey you’d encounter a thoughtfully-created backstory. This was told through intelligently-placed files which fleshed out the gameworld, making the Romero-esque scenario more believable.

Combat was rudimentary and there to add colour to your journey without being the main focus. Every so often you’d come across a linear section, ripe for exploration and awash with answers, before the next big hub. Your enemies might have been undead but the world felt lived in.

Advancing console technology presented a huge opportunity to organically evolve each of those elements and create a truly next-gen Resident Evil. Imagine a gameworld as cohesive as Liberty City, one where puzzles were less contrived and promoted exploration.

Within this landscape you’d face grotesque monsters, fighting for your life in pitched battles using responsive new shooting mechanics. All the while, you’d uncover further layers of a conspiracy which would overshadow everything that had come before.

Evolved point-and-click elements, intelligent world building and innovative shooting would take the series in a brave new direction – one which would make creative as well as commercial sense.

At least Resi 4 got the shooting engine right. As for the rest? One contrived linear corridor after another, dressed up as one cool action movie cliché after another (does anyone know why that statue came to life, exactly?).

These were interspersed with the occasional mini-hub where puzzle pieces presented themselves within a stone’s throw of the actual puzzle, so there was never any real thinking involved. Notes weren’t there to be discovered – they were left lying around so conspicuously they couldn’t be missed, as if tossed into levels at the last minute.

Puzzles and notes are hub game conventions. In a linear action game they just felt forced. So why were they there?

For my money, because Capcom couldn’t decide which conventions were essential to Resident Evil as a brand and which should be abandoned. This would also explain why the hardened government operatives of Resis 4 and 5 can’t aim and run at the same time, a feat even weedy writer Alan Wake can manage.

Don’t even get me started on the Merchant. Who thought a comedy leper with a West Country accent was a good fit for an immersive survival horror game? Give me linked item boxes any day; they’re less distracting and I don’t have to offset the very real chance of breaking my game against the overwhelming urge to shoot them in the crotch.

Which brings me back to Metal Gear Solid. The PSone instalments in the series were stealth games. The PS3 iteration is, astonishingly, also a stealth game. Sneaking has been streamlied via OctoCamo and a camera, while controls cater to action gamers. New converts are thus brought on board without alienating anyone. Even MGS 4’s own Merchant, Drebin, is explained in the story. This is how to do a sequel.

In contrast, Resi 4 saw a series stuck in a rut go so far to the opposite extreme it became barely recognisable, aside from a few superficial similarities – returning characters, so-bad-it’s-brilliant voice acting and a surplus of potted plants.

What was once a slow, tense, puzzle-led experience was transformed into a series of tacked-together Cool Gaming Moments. Resi 4 feels like the product of ten different minds in a super-macho staff meeting, rather than the singular creative vision of one man.

On a purely mechanical level, it is a remarkable game. It deserves the plaudits received and can rightly be held up as the landmark title which gave us Gears of War et al. In that respect, Capcom nailed it.

But here’s the big problem: Resident Evil 4 is not a Resident Evil game. And that’s the one thing it should have been, above all else.

It’s the best example of the worst way to update a big franchise – discard the features which defined the brand in the name of appealing to the mainstream, while retaining just enough superficial consistency to appease players who don’t bother to look beneath the surface.

This represents fractured integrity and a shocking, bare-faced display of short-term reactionary thinking with regard to what should be a cast-iron gaming icon. It baffles me that so many people think this was a good thing.

The fact Capcom is already talking about another reboot, just one direct follow-up later, speaks volumes. Apparently we can expect a return to the exploration and mystery of old. With any luck that will be married with some fresher, better balls-to-the-wall action, and then we’ll have a sequel worth waiting for.

Until then, I view Resident Evil like a T-Virus victim: ambling, grotesquely mutated and to be approached with caution.