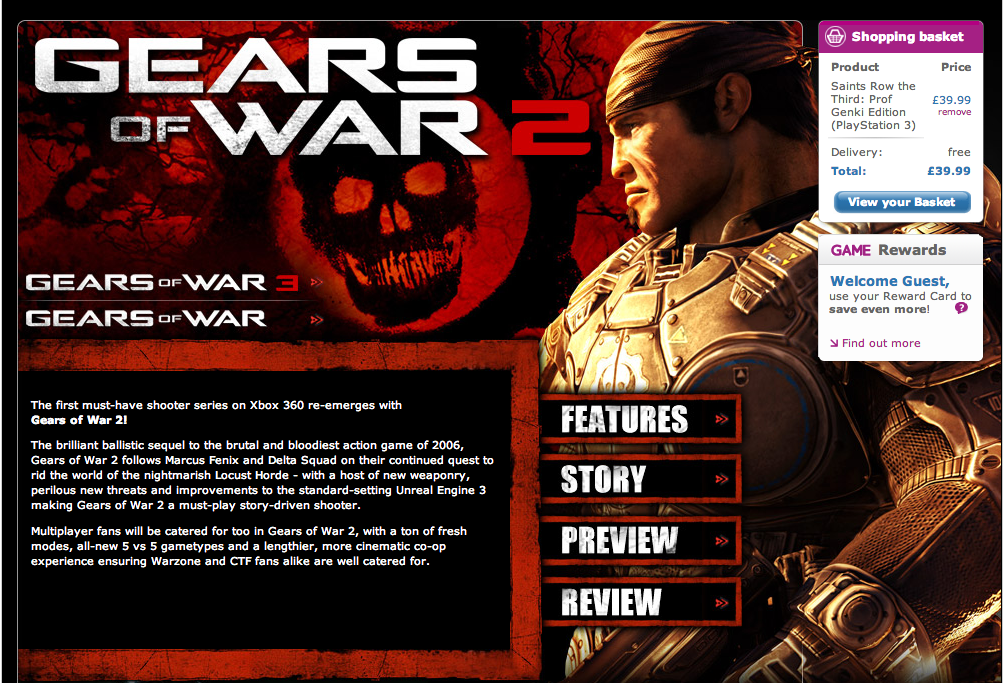 Background
Game’s web content strategy revolved around giving online recommendations on products just like Game staff would in store. That was most easily accomplished with a product review. These were also loaded with keywords to improve the SEO value of the piece.

The work
The part of the job that’s every kid’s dream. I contacted Microsoft PR to source a copy of the game, played it, and reviewed it.

Microsoft were slated for not launching the 360 with a new Halo, but the announcement of Gears of War from Unreal creators Epic Games took the edge off – and when it arrived, doubters were silenced by its HD destroyed beauty and genre-redefining stop-and-pop gameplay.

Still, if you’d told us back in 2005 that Halo 3 would end up as only the console’s third biggest shooter, we’d’ve thought you’d breathed in too much Imulsion. But that’s what’s happened; first CoD4 bagged last year’s People’s Choice award, and now Gears of War 2 has arrived to blow away the shooter competition… and arguably every other game this year, too.

Gears of War 2 has one simple goal according to Epic’s Lead Designer Cliff Bleszinski: to deliver “the rollercoaster ride of your life.” And a rollercoaster it is; of blood, gore and chainsaw-revving, adrenaline-pumping action.

Indeed, Gears of War 2’s Campaign often feels like the best action movie ever played. Not only has the cover system been tweaked, letting you snap to cover from further away, but weapon and enemy quotas have been intelligently upped, featuring more imposing Locust and heavier artillery with which to take them out.

From the very first chapter, Gears of War 2 hurls hulking Brumaks, Corpsers, Boomers and more your way, all of which fall beneath the mighty new gatling gun Mulcher and miniature airstrike Mortar. Meanwhile, explosive scuttling Tickers, flamethrower-equipped foes and enormous tentacled Reavers send you scurrying from cover in sheer self-preserving panic. You can play strategically too, setting grenades as mines and backing off to watch the fireworks – or find yourself in a deadly button-hammering chainsaw duel. It’s typical Gears, taken to spectacular, nerve-battering new heights.

The already amazing visuals have been improved as well in Gears of War 2, with a palette of planet surface forest vistas, crumbling warzones, eerie caverns and pulsating sinew, all played out to an electric pace of pulse-pounding set pieces, gritty duck-and-cover combat and wisecracking fratboy machismo. Gears of War 2 is every bit the bigger, better, more badass game that Epic promised.

Yet it’s the subtleties of Gears of War 2’s story (yep, there actually is one this time around) that most surprise. Occasionally amidst the gore and gunplay comes a radio conversation to let you catch your breath, or a genuinely emotive bittersweet cutscene, making you realise what Fenix and co. are fighting for. At other times you’ll find notes carrying a near-conspiratorial undercurrent, hinting at a huge plot twist that never comes – but which fans can expect in the inevitable sequel.

“Horde is Gears of War 2’s surprise hit, guaranteed to have you returning time and again to improve your place on the online leaderboards.”

Don’t let that fool you, though; Gears of War 2 is far more satisfying than the first game. It’s around a third longer, and just when you think it’s about to end, it throws a whole extra act your way. And the grand finale, while not conclusive in narrative terms, feels far more accomplished than Gears 1’s abrupt anticlimax.

For fans, experiencing Gears of War 2 in co-op will be a must. But that doesn’t necessarily mean Campaign. Horde is a new five-player co-operative mode, requiring teamwork and skill to make it through 50 terrifying waves of increasingly powerful Locust. It’s Gears of War 2’s surprise hit, guaranteed to have you returning time and again to improve your place on the online leaderboards.

More traditional multiplayer modes have also been fleshed out in Gears of War 2. Matchmaking is in (though currently pretty slow), the player count has been raised from eight to ten per game, and new gametypes have been added. The highlights are Wingman; where five teams of two battle it out, and Submission, which is basically Capture The Flag with a Gears of War 2 twist: the flag is a man, wielding a shotgun, and he won’t be taken without a fight.

Is Gears of War 2 the console’s biggest shooter then? Absolutely – it’s a stonking sequel that makes the original look like a tech demo, with an almost unrelenting pace that makes every other 2008 release feel positively pedestrian by comparison. Gears of War 2 delivers on its rollercoaster remit, ten-out-of-tenfold. Gaming simply doesn’t get better than this.