Objective
Promote Game’s presence at The Gadget Show Live, encourage people to attend the show, and help the Game social media community feel a part of the event.

Background
An exhibitor at The Gadget Show Live in 2010 and 2011, Game partnered with its organisers to market the show to mutual benefit. Game was given free show tickets to give away prior to the show, free keyrings to give away at the show, and an exclusive games-playing competition for attendees to enter at the Game booth. In addition, Game would offer customers an extra 25% discount on the trade-in value of any games swapped at the show.

The work
In 2010 I attended the Gadget Show Live for Game and interviewed The Gadget Show host Jason Bradbury. This was published exclusively on the Game Facebook page. In 2011 I wrote all copy for the micro site (pictured), which was promoted on the Game website and the weekly newsletter.

See for yourself
Browse below or view the interview on Facebook. 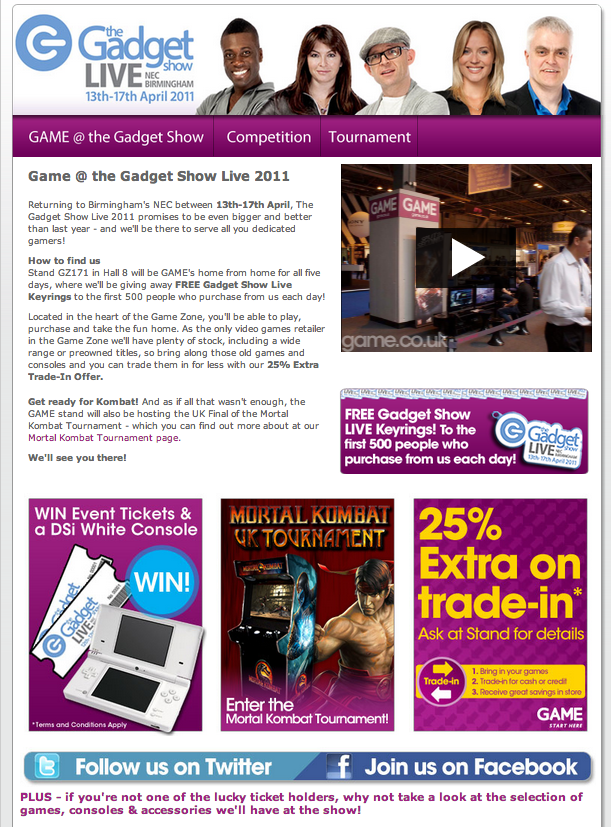 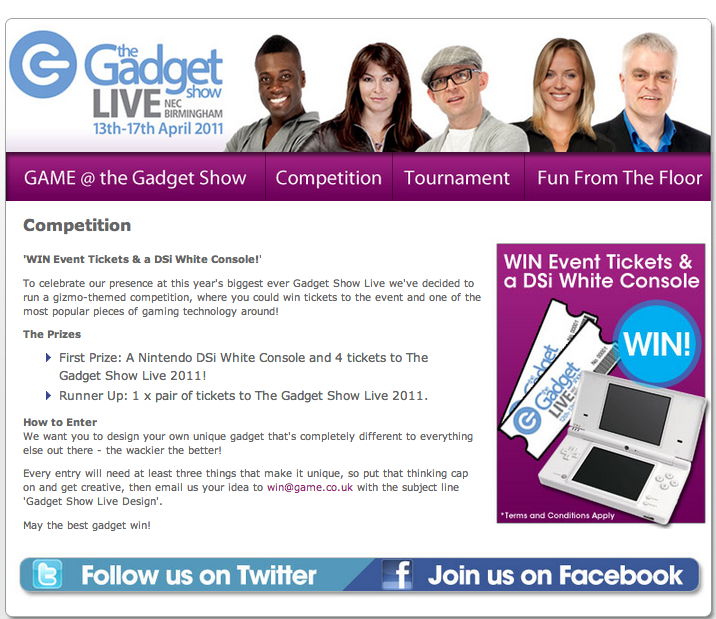 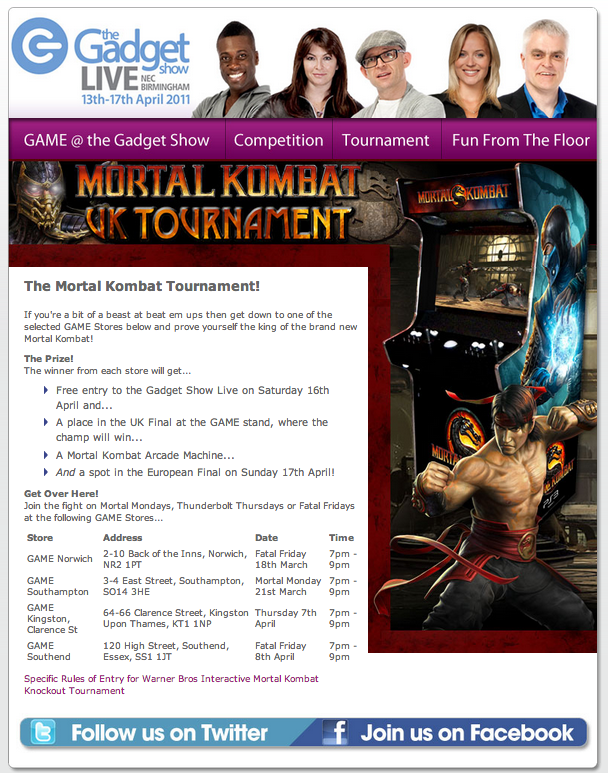 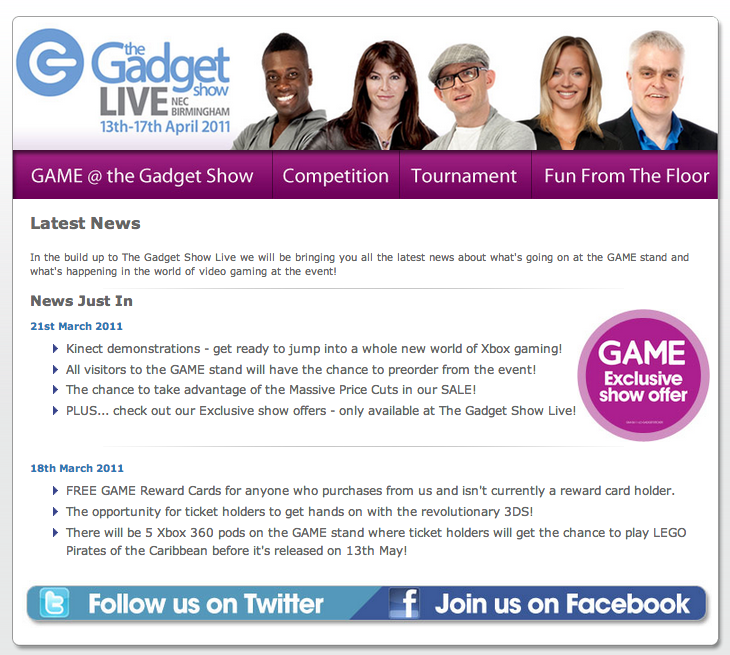 GAME talks to Jason Bradbury at The Gadget Show Live!

9 April 2010 at 20:13
Gadget Show host Jason Bradbury is a self-confessed gamer and a major part of this year’s bigger and better Gadget Show Live, happening at Birmingham’s NEC from 7th-11th April.

We caught up with him on the first day, when he happily shared his thoughts on the Video Game BAFTAs, app gaming, 3D telly, and the big battle for supremacy in the next gen of gaming…

Hi Jason, great to get to chat to you! How involved have you been with setting up The Gadget Show Live?

Hugely involved. Like, there’s something here called the Aerial Test Track, a stupid idea I had four months ago where we were talking about the usual test track and I said we should have an aerial test track where we fly helicopters and stuff – they only went n built it!It’s this MASSIVE cube, reaches right to the roof – it’s got to be 30 foot high – made out of transparent plastic, it’s inflatable and they’re flying crazy robotic things in there – so yeah, I’m very involved. I’m involved in the scripting of the live show of course; I’ve got my own stand here, my atomic swarm book has just come out, all part of the Dot Robot series of books, and there’s a video I’ve done that I’d love the people who visit your site to see.

It’s on Youtube, it’s called Robot Kitchen Rampage, or you can find it on my website JasonBradbury.com. It’s the robot, from my books, made real, flying around my kitchen, smashing the place up. It’s actually showing, exclusively in HD on a 42” plasma at my stand where I’m signing books; so that’s another way in which I’ve been involved with The Gadget Show Live outside of the Live Show in the Super Theatre.

You’re a huge gamer yourself – what’s your favourite game?

That’s a hard one, because I’d have to go back to the 80s and Manic Miner. At the moment, the game that I’m really enjoying is Modern Warfare 2, because unlike like a lot of gamers I have very limited time, so I’ve still got a lot of play in it. I’m talking about the online version though; I don’t really play a lot of the singleplayer. I LOVE arena-style multiplayer.

I’ve also really enjoyed the little I’ve played of Mass Effect 2, and I play a lot of games on my iPhone; the GTA on there, China Town Wars; I play a lot of Eliminate Pro on the iPhone – a lot of really good networking on that, great little shooter. Also I play a lot of SingStar with my kids, and Wii Sports Resort.

I don’t always play the latest games, because I get them and it takes me a while to find the time to play them, so I’m normally playing games that a lot of gamers have moved on from.

You were on the BAFTA panel for the GAME Award this year – was there anything you were disappointed didn’t make it onto the list?

Yeah, I was disappointed we weren’t able to make enough noise about iphone and ipod related games. I think that’s the new gaming platform, and there’s a lot of snobbery – not from BAFTA, BAFTA rock! – but from the gaming community about bedroom-coded games like Rolando and other quirky titles, and around the iPod, iPhone and iPad platforms.

I think they’re a really interesting, accessible, inexpensive way of accessing games when you’re on the move and we should all pay more attention to them.

Were you happy with the results of the GAME Award, and also BAFTAs overall Best Game award?

I was SO PLEASED that Batman: Arkham Asylum got the Best Game BAFTA. It’s home grown, man! It was made, like, three miles from where I live! My mate Poz was the producer of the game; I was very happy with that, a really well deserved win.

Personally though I was involved with the GAME Award, the people’s award. And I’m so pleased that Modern Warfare 2 won that. We are talking about a game that hit the one billion dollar profit margin in a matter of weeks. It is a spectacular result for a game that was so expensive to make; a very well-deserved result too in my eyes.

I absolutely cannot let you go without first asking you about 3D and Motion Tech – can you tell us your thoughts?

First of all, 3D. 3D Television; watching football and movies… for me, it’s never gonna happen. I think it’s a loss leader. I cannot imagine sitting there with my Mom, and my kids, all wearing goggles… it’s just stupid.

For me, the innovation with 3D is about gaming. Sony are doing some really interesting stuff, even here at the show, with 3D. NVidia are doing some great stuff on the PC platform.

Gamers as a community don’t mind peripherals, technology and new ideas; we embrace that stuff. Make 3D about gaming and it’ll succeed. Make it about sitting down and watching a movie in your living room with your kids and their Mom, and it’s never gonna happen.

2010 is all about hardware. It’s about Natal and Move.

I think Move has the edge; it has the big names behind it, and it looks like a really precise, real-time motion platform. Natal however, could be the sneaky winner. The notion of not having anything on you, just using your body, is magical. As long as the software is there.

And let’s not forget 3D on the DS! It’s gonna be an amazing time for games.

Do you think Nintendo’s MotionPlus will compete with Natal and Move?

No I don’t. I really think Wii’s star has fallen for the time being.

Lastly, one of our Twitterers asked if we could sell Suzi Perry on the game website – what do you reckon?

Heh, probably not! Thanks Jason.